I have a confession to make: I didn’t know today was National S’Mores Day until my mom texted me about it (thanks Mom!). But, I’ve been on a s’more-inspired baking kick recently, so I already had the perfect recipe ready to share and commemorate this very special “holiday.”

S’Mores have long been one of my favorite treats. I have fond memories of sitting around the beach fire pits near my high school, making s’more after s’more and memory after memory. My friends and I would play around with the ratio of graham-to-marshmallow-to-chocolate, stacking layer after layer to see how high we could go. 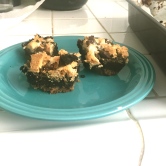 In recent years, I’ve experimented a lot with s’more-inspired baked goods. Last year I whipped up some S’Mores Cupcakes with Marshmallow Crispies. The year before that, it was these wonderful S’More Cookie Bars. This year I decided to try more than 1 over the course of “S’More Season” – so the brownies you’ll see today are only the first in a series! If you want a sneak peek of other S’Mores treats that may show up on the blog, check out the Pinterest board where I store all my S’Mores-inspired ideas.

We ate these in a park. It was glorious.

Now: about these brownies. There is a graham cracker layer all the way at the bottom, pre-baked a bit to get it nice and firmed up. You cover the cracker layer with a rich, brownie layer that bakes up into delicious, rich brownies. And then you sprinkle a generous topping of mini marshmallows, graham cracker bits and chocolate pieces on top to create a “s’more” effect in every single bite. I made these for a friend’s going away party and subbed in dark chocolate everywhere possible, since that’s her favorite type of chocolate. Since we ate these outside, the chocolate on top melted a little – which ended up being an awesome touch and amplified the “s’mores” effect.

These brownies are rich, and the recipe makes a full 9×13 pan so these are great for a party. Make sure to allow time for this recipe’s phased baking process: you’ll throw the pan into the oven 3 separate times at different points in the recipe.

Original recipe: Chef in Training. I’ve made some modifications and added my own commentary.

Eat warm if you want melty chocolate on top; cool if you prefer little chunks of chocolate to bite into. These kept nicely for 2 days beyond the bake date. Make sure to store them in an airtight container if you want to keep them around.

Graham layer is ready to go! 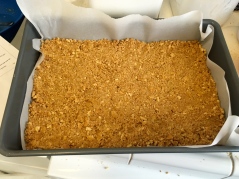 Ready to bake the crust

Creaming the butter and sugar 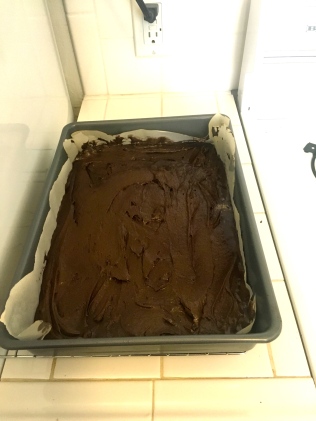 Brownie batter is ready to bake! 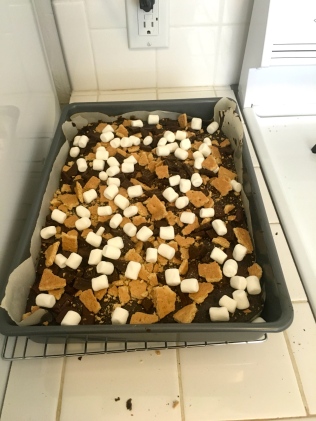 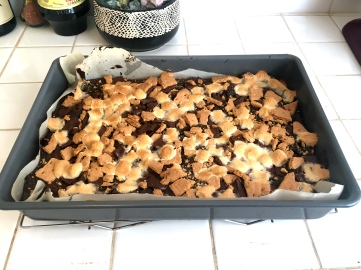 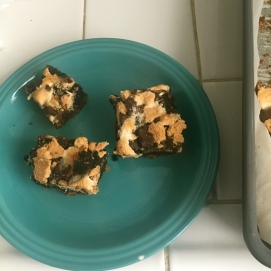